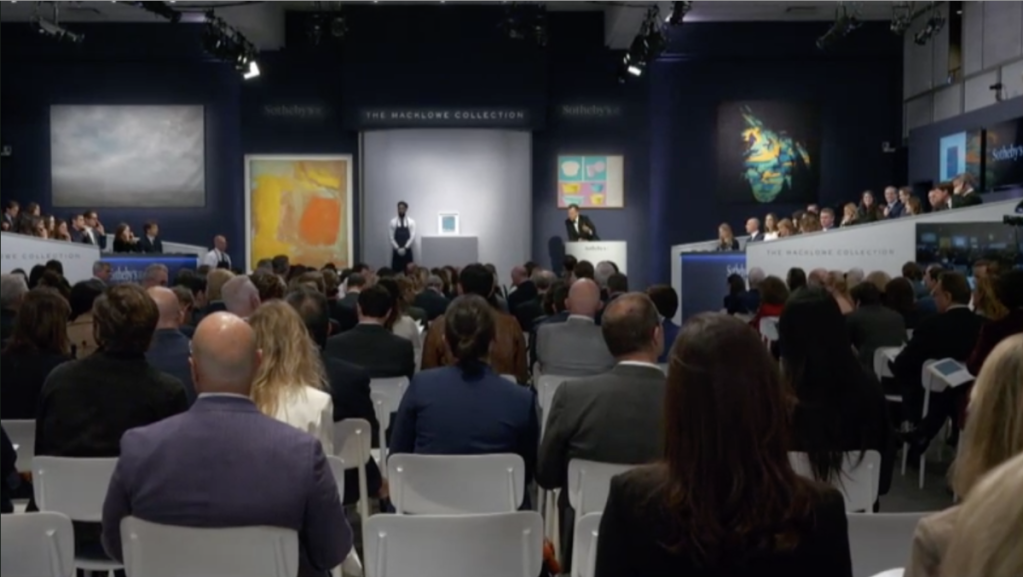 In one of the most anticipated auctions in art market history, part two of the collection of divorced New York real estate developers Harry and Linda Macklowe fetched $246.1 million at Sotheby’s on Monday evening in New York.

The night brought the much-vaunted total for the Macklowe Collection to $922.2 million, making it the most valuable sole proprietor sale ever at auction and surpassing the total achieved for the Rockefeller Collection sale at Christie’s. in 2018, which grossed $832 million against an estimated $500 million.

The guaranteed group of 30 works sold this week, 19 of which came up for sale with irrevocable offers, exceeded its estimated price of $167.6 million by more than $75 million. It was the second installment of the total 65 works from the Macklowes’ collections to be auctioned – in a court-ordered sale as part of the billionaire couple’s closely watched divorce proceedings – to be offered at the house’s headquarters in New York. The first sale held last November generated $676.1 million, with records broken for esteemed artists not known as major market darlings like Agnes Martin, Robert Irwin and Michael Heizer.

Sotheby’s auctioneer Oliver Barker led the hour-and-a-half sale, which took place in the house’s York Avenue auction room. Barker hosted a room nearly full of members of the public, including heavyweight dealers and advisers like David Nahmad, Mary Hoeveler and Wendy Fischer. The pressure on Monday night was less palpable compared to last year’s part of the sale, where bidders were vying for the keys to the post-war works that charged the room with energy.

“There is great value in the consistency of the works in the collection,” said New York art advisor Erica Samuels, who attended tonight’s auction in person. “This sale was very concrete. It was business. »

Among the works that fetched the highest price on Monday was an untitled dark red canvas by Mark Rothko from 1960 that sold for $48 million. Arriving at the sale with an irrevocable bid, he hammered in $41.5 million, speaking to a bidder on the phone with Grégoire Billaut, chair of the contemporary art department at Sotheby’s New York; his client triumphed over a Hong Kong bidder on the phone with Sotheby’s Asia President Patti Wong after several minutes. It was still a long way from surpassing Rothko’s current auction record of $86.8 million, set in 2012 when Orange, Red, Yellow (1961) sold at Christie’s.

A representative of Sotheby’s Japanese office won the tender for Andy Warhol’s Vanitas: skulls and self-portraits (1962), a self-portrait covered in camouflage patterns, fetched $16 million, just above its low estimate of $15 million. Elsewhere in the sale, Asian auctions were present, with Hong Kong buyers predominating for works by Cy Twombly, Sigmar Polke and Mark Grotjahn selling for between $5 million and $15 million.

The monumental canvas by Gerhard Richter from 1975 Seestück (Seascape), a blurry view of a gray ocean horizon, sold for $30.2 million with premium, hammering in at $26 million, just above its low estimate. He went to a bidder on the phone with Sotheby’s New York contemporary specialist David Galperin.

Another expensive item that came on sale with an irrevocable bid was Cy Twombly’s Synopsis of a battle (1968), one of the artist’s signature black canvases in the form of a blackboard with white doodles; it sold for $15.3 million. Only two bidders – one on the phone with London-based impressionist and modern art scholar Sam Valette, and the other with New York-based contemporary scholar Jackie Watcher – competed for the work. He hammered with the Valletta client at $13.5 million, above his low estimate of $12 million.

A bronze sculpture by Alberto Giacometti titled Diego on stele II (1968), a pedestal-like sculpture of a reclining standing figure inspired by the artist’s brother was among the post-war works that achieved moderate auctions. It sold for $8.9 million, against an estimate of $7 million, likely at the surety.

One of the evening’s most suspenseful auctions was for a work by Agnès Martin. The Long Underrated Artist’s White Striped Canvas The happiness of every morning (2001) made 4 times its low estimate of $2.5 million, finding a buyer over the phone with New York specialist Bame Fierro March for $9.9 million (with commission). He triumphed over a bidder in the room for this. That sum, however, is well below Martin’s auction record of $17.7 million, set in November when his monochrome Untitled #44 (1974) sold in the first part of the Macklowe sales. The underbidder won a second work by Martin that was offered, which sold for a hammer price of $5.3 million.

Another Warhol serigraph, a red and black canvas titled sickle and hammer from 1976 sold for $6.4 million, against an estimate of $4 million. At Sigmar Polke Plastic-Wannen (Plastic Tubs), featuring blue, yellow and pink plastic wares painted with clinical precision sold to a client of Sotheby’s Switzerland President Caroline Lange for $6.5 million with fees, well over above its low estimate of $3.5 million. A bronze sculpture by Giacometti, depicting the artist’s brother, Diego, sold for $8.6 million, exactly within its pre-sale estimate of $7-10 million.

Samuels, the New York art adviser, said the works sold, which represent five decades of collecting primarily led by Linda Macklowe, show a “collector’s imprimatur”, from which the next generation of patrons has something to learn.

She added, “These are the artists who represent the styles of art that attracted her: Pop, Abstract Expressionism and Minimalism – in essence, the art of her time.”