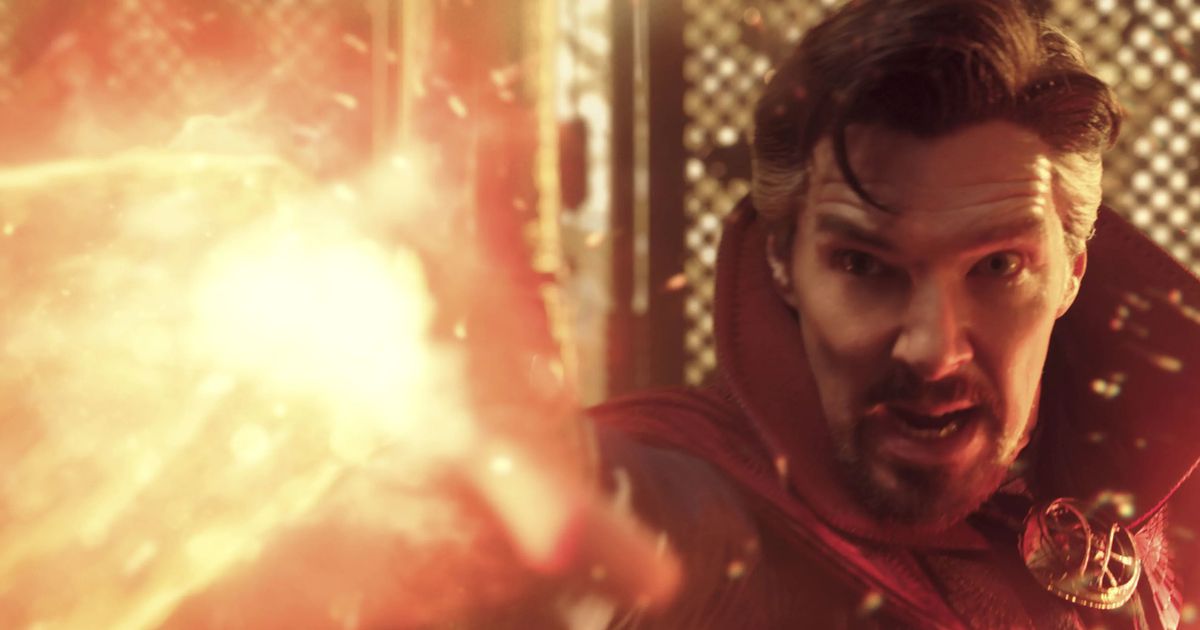 Movies in North Texas theaters May 6th and soon

Letternotes are only listed when a revision is available.

(B) DOCTOR STRANGE IN THE MULTIVERSE OF MADNESS There’s plenty of witchcraft and evil twins in this spooky and unhinged new Marvel film from director Sam Raimi. It begins with a giant octopus attack and spreads its narrative tentacles from there, drawing us into an alternately awkward and macabre story that occasionally pauses to unleash a tidal wave of grief. Benedict Cumberbatch is superb as Dr. Stephen Strange. Also starring Rachel McAdams and Elizabeth Olsen. PG-13 (for intense sequences of violence and action, scary images and some language). 126 mins. In wide version.

LITTLE WIZARD In this animated movie, a prince finds himself trapped in the body of a mouse and a group of friends embark on a quest to turn him back into a human. Unclassified. 86 mins. At Galaxy Theaters Grandscape at The Colony.

THE RAVINE A horrific crime rocks a peaceful community, leaving family and friends wondering if they’ve noticed a murderer among them or if there could be more to the story. With Eric Dane, Teri Polo, Peter Facinelli and Leslie Uggams. R (for a bit of violence and language). 121 mins. Available on VOD platforms.

SUICIDE FOR BEGINNERS In this comedy-horror, an insecure man (Wil Daniels) is determined to murder his unrequited love (Sara Tomko), but his clumsiness and incompetence instead set him on the path to becoming a serial killer. . Unclassified. 94 mins. At America Cinemas La Gran Plaza in Fort Worth.

FAMILY CAMP In the feature debut of Christian comedy duo The Skit Guys (Tommy Woodard and Eddie James), a trip to a family camp brings out the competitive side of two dads. PG (for certain actions and thematic elements). 111 mins.

FIRE STARTER A young girl (Ryan Kiera Armstrong) struggles to control her mysterious ability to set things on fire with her mind in this film based on Stephen King’s novel of the same name. Also starring Zac Efron, Gloria Reuben and Kurtwood Smith. R (for violent content). 110 mins.

EVENT A young woman seeks an illegal abortion in 1960s France in this adaptation of Annie Ernaux’s novel. R (for disturbing material/images, sexual content and graphic nudity). 100 mins. In French, with subtitles.

THE LAST VICTIM A sheriff (Ron Perlman) pursues a gang of outlaws in this modern-day western thriller. Unclassified. 103 mins.

REVENGE After his daughter is brutally murdered, a man (Clive Standen) sets out for revenge and finds himself in a war with a street gang. Also starring Bruce Willis, Thomas Jane, Theo Rossi and Mike Tyson. R (for violence, pervasive language and some sexual/nudity content). 96 mins.

(VS) AMBULANCE After a heist goes awry, two bank robbers (Jake Gyllenhaal and Yahya Abdul-Mateen II) take hostages and rob an ambulance in an attempt to escape in director Michael Bay’s return to a time when thrillers of action were big, loud, decadent and ripped off since die hard. It maintains such a frenetic pace from start to finish that it ultimately feels exhausting. Also starring Eiza González. R (for bloody images, pervasive language and intense violence). 136 mins.

(B) THE VILLAINS In this fun animated tale that riffs on Ocean’s Eleven, a gang of criminal animals decide to become model citizens. The moral of the story doesn’t pack a big punch. Still, it’s smart, visually interesting and very, very funny. With the voices of Sam Rockwell, Awkwafina, Craig Robinson, Zazie Beetz, Marc Maron and Anthony Ramos. PG (for action and crude humor). 100 mins.

(A) THE DUKE In this real-life tale, a taxi driver (Jim Broadbent) steals a portrait from London’s National Gallery and demands better care for the elderly in exchange for its return. This lively and engaging film also stars a terrific Helen Mirren as his long-suffering wife. R (for language and brief sexuality). 96 mins.

(A-) EVERYWHERE AT THE SAME TIME In this crazy sci-fi adventure comedy, a Chinese immigrant (Michelle Yeoh) struggles with an IRS tax audit while being drawn into a violent multiverse showdown. It is an absurd and tasteless ode to the messy and absurd struggle and happiness of being human. R (for language, some violent and sexual content). 139 mins. In English, Mandarin and Cantonese, with subtitles.

(VS-) FANTASTIC BEASTS: SECRETS OF DUMBLEDORE Magizoologist Newt Scamander (Eddie Redmayne) leads a team of wizards, witches and a brave Muggle on a mission to thwart an evil wizard (Mads Mikkelsen) in the third installment of the JK Rowling series. The film is less cluttered with distracting details than its immediate predecessor, but even a more polished plot can’t keep the over two hour film from feeling like an endurance test. Also starring Jude Law. PG-13 (for fantasy action and violence). 142 mins.

(VS) FATHER STU Mark Wahlberg stars in this religious drama about boxer-turned-priest Stuart Long. With his familiar rapid-fire style, Wahlberg can be entertaining. But the film is rarely truly engaging, and the no-show scriptwriting approach makes the characters two-dimensional and hollow. Also starring Jacki Weaver and Mel Gibson. R (for language). 124 mins.

(B) BIRD OF FIRE In this drama based on a true story, a young soldier (Tom Prior) and a fighter pilot (Oleg Zagorodnii) come to the attention of the KGB after they embark on a secret affair at a Soviet air base. The shiny, sleek 1970s melodrama soars with passion and is enhanced by strong production values, heartfelt performances, and a story arc that travels to unexpected destinations. R (for language and some sexual content). 107 mins.

(B) HATCHING In this imaginative Finnish horror fairy tale, a young gymnast (Siiri Solalinna) hatches a murderous monster from an egg she secretly nests in her bed, and that’s not even the scariest part – her perfectionist mother (Sophia Heikkilä) strikes the truest terror in the film. Like many great monster movies, Hatching uses a monster as a metaphor for pent-up emotion, and the creature at the center of this film is one of the most grotesque creations seen on screen in a long time. Unclassified. 86 mins. In Finnish, with subtitles.

JUJUTSU KAISEN 0: THE MOVIE In this animated tale from Japan, a teenager gains supernatural powers and enrolls in a special school to help him train. PG-13 (for certain suggestive references, language, gory images, thematic material and violent content). 105 mins. In Japanese, with subtitles.

(B) THE LOST CITY After a reclusive romance novelist (Sandra Bullock) is kidnapped, her cover model (Channing Tatum) sets out to rescue her. This jungle adventure isn’t just an entertaining adventure; it’s a return to rom-com form for one of the genre’s best and brightest stars. Bullock still has it, and she won’t let you forget it anytime soon. PG-13 (for violence and some bloody images, suggestive material, partial nudity and language). 112 mins.

(D+) MEMORY An assassin (Liam Neeson) learns he’s become a target after refusing to complete a job for a crime syndicate, but his failing memory gets in the way of his quest for revenge in this forgettable action thriller that’s plagued by bad luck. storyline and flat characters. R (for violence, some bloody images and language throughout). 114 mins. In English and Spanish, with subtitles.

MORBIUS In this Marvel superhero movie, a biochemist (Jared Leto) with a rare blood disease attempts a dangerous cure but instead infects himself with a form of vampirism. Also starring Matt Smith, Michael Keaton, Adria Arjona and Tyrese Gibson. PG-13 (for intense sequences of violence, some scary images and brief coarse language). 104 mins.

(A-) THE NORTHERN MAN Director Robert Eggers brings the Viking epic back to the big screen in a big, bold and gory way with this daringly bonkers epic starring Swedish actor Alexander Skarsgård. R (for strong bloody violence, some sexual content and nudity). 136 mins.

(A) LITTLE MOM In this sublime French exploration of friendship and mother-daughter relationships, an 8-year-old girl accompanies her parents to clean the house of her recently deceased grandmother and forms a bond with a young neighbor who looks suspiciously like her. PG (for some thematic elements and brief smoking). 72 mins. In French, with subtitles.

(VS-) SONIC THE HEDGEHOG 2 The Blue Hedgehog faces off against the evil Dr. Robotnik in this animated sequel based on the popular video game franchise. The overlong film wears down its reception long before it turns into another phone franchise entry. With the voices of Ben Schwartz, James Marsden, Jim Carrey and Idris Elba. PG (for some violence, action, crude humor and soft language). 122 mins.

(A-) SPIDER-MAN: NO WAY HOME Spider-Man (Tom Holland) has his secret identity revealed and turns to Dr. Strange (Benedict Cumberbatch) for help in the latest entry in the Marvel superhero franchise. For a movie full of fan service and nostalgia — from little Easter eggs to crowd-pleasing cameos — No coming home also has a strong heart and feels like a satisfying conclusion to this arc in Peter Parker’s life. PG-13 (for certain language, action/violence sequences and brief suggestive comments). 148 mins.

(B+) THE UNPORTABLE WEIGHT OF MASSIVE TALENT Nicolas Cage embodies Nicolas Cage, a vain person to whom you get used to in a few seconds in this comedy which has fun in delirium to make fun of the actor. The film is equal parts slightly absurd buddy flick, straight-faced crime thriller, and hall of mirrors in which Cage’s life turns into a movie, and then back again. R (for violence, drug use, some sexual references and language throughout). 106 mins.

(VS) UNEXPLORED A clever thief (Tom Holland) is recruited to recover Ferdinand Magellan’s lost fortune in this film based on the popular video game series. This adventure movie is fine and entertaining enough, but while some moments are inspired, others are completely inert. PG-13 (for violence/action and language). 116 mins.

Compiled from staff reports and threads